Please enjoy some stories from some of Tassie’s more well known characters when things haven’t exactly gone to plan.

Sam Dean And His Wardrobe Malfunction

During one of the songs in Playing The Palace, Cammie Mile’s character is trying to attract my affections. Towards the end of the song, she aggressively grabs my shirt and pulls me in. The audience thought this was hilarious. I thought that they were laughing at my facial expression and excellent acting skills. It took me a while to realize that they were actually laughing because my nipple had popped out. I quickly covered myself with my hand, but by now the audience and everyone on stage were laughing. 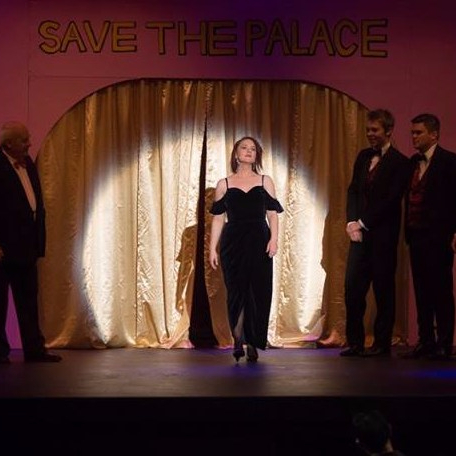 My most memorable on stage mistake was during my second ever show, Annie Warbucks. I was 10.

It was the night the show was being filmed, so all of us “orphans” were nervous and excited. I’d also recently started wearing glasses, but because we were supposed to be poor orphans, I wasn’t supposed to wear my glasses on stage.

During the party scene half way through the show, the six orphans ran on stage. As we started the choreography one of the girls started hissing at me “Grace, you’re still wearing your glasses!” Being young and very earnest, it didn’t occur to me that the simplest fix was just to wear the glasses for the scene. I whipped them off, and after we’d finished our little dance, the group of orphans all frantically tried to figure out in loud whispers what to do with the hateful specs. We all decided hiding them was the best course of action. So in the video you can see six pre-teen girls in brightly coloured taffeta traipsing off to a corner of the stage in front of the proscenium (a part of the set that wasn’t supposed to exist in that scene) and disappearing from the light before running back to our positions in relief.

Of course I got off stage and sobbed thinking that the 30 second interlude had “ruined the show” and “spoilt the video”, but 16 years has given me more perspective!

In 1997, I played Richard Lyons in a Mainstage production of Blood Brothers . Leiz Moore played my wife, Jennifer and our adopted son was Petr Divis. I was in a lot of scenes with Leiz, but there was one evening that I lost concentration and the message came through that I was supposed to be on stage. Whilst Leiz was out on stage trying to fill in time, I didn’t even have my costume on! I threw on as much as I could before jumping on stage. I realised that, apart from not having my shoes on, my fly was undone! My last line at the end of the scene was supposed to be “Jennifer, I have to go, I’m late for work.” I went through with the scene and finished with “I have to go, I have to get ready for work”. So I did my fly up and walked off.

This was in a production of Pygmalion with Roger Chevalier. There were big Doric columns on stage because the show starts on the steps of Covent Gardens of the opera house. The columns were made out of that plastic stuff that the sun shines through on the roof, so they were very light weight. I was playing Colonel Pickering and Roger was Henry Higgins. As we were walking off stage, we knocked one of the columns over. I said “They don’t make these columns like they used to, do they?” They crowd went crazy so we sort of got away with that.

Annie Harvey was directing And Then There Were None, an Agatha Christie show. The guy that was killed was called Oliver Costello. Being a bit of a loose cannon nutter, I was calling him Elvis Cromwell during rehearsals (a juxtaposition of Elvis Costello and Oliver Cromwell). People were saying “you shouldn’t do that you know. You’ll pay the price”. And I did.

We had one night were I said “I arrest you for the murder of Elvis Costello! … uh, and  I must warn you… Oliver!” But by the time I had corrected myself, the crowd had just lost it. It went on for so long! I’m just standing there trying to talk over the top of the raucous crowd, who were by this stage clapping.

I didn’t really get away with that one.